From 1985 onwards, we have been blessed to receive the services of full-time Vicars, who are posted by the Madhya Kerala Diocese for 3-year terms. The full-time Vicar is also the President of the Board of Trustees of our congregation. Day to day administration of the church is handled by the Board of Trustees. Our congregation is a pastorate of the Madhya Kerala Diocese of the Church of South India. We are affiliated with The Council of CSI Congregations in North America.

In 2001, with the generous contributions of our members, we purchased our own church in Seaford, Long Island. We began worshiping at this location on December 22, 2001. The church was formally dedicated by the then Bishop, Rt Rev Thomas Samuel of the Madhya Kerala Diocese on July 14th, 2002.

The second stage of our building project (to build a parsonage and hall) was completed in December of 2008. The project was funded by our members donations and from proceeds of the sale of our parsonage in Queens Village, NY.

Our congregation is constantly growing, with a present membership of over 100 families. Average attendance on Sundays is over 200 people. Our Almaya, Choir, Sunday School, Womens Fellowship and Youth Fellowship remain the mainstay of our congregation. 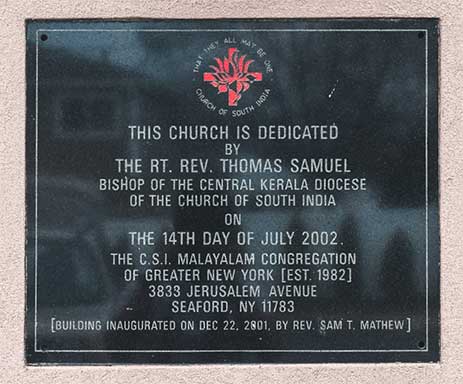